In addition to providing out-of-the-box forests for quantile regression and instrumental variables, grf provides a framework for creating forests tailored to new statistical tasks. Certain components around splitting and prediction can be swapped out, within the general infrastructure for growing and predicting on trees.

This repository follows the standard open source protocol and setup with git where there is an abundance of existing resources to get up to speed (see for example the contributing guidelines for well known packages in other languages, like Scikit-learn, Scipy, and pandas)

Condensed greatly, the workflow is to fork this repository, check out a branch, commit your changes (forming an ideally legible commit history), then submitting a pull request explaining your contribution, ideally referring to the issue you created, or the issue you chose to work on.

Working with the code

The core forest implementation is written in C++, with an R interface powered by Rcpp. We recommend using a full-powered C++ IDE such as CLion, Xcode, or Visual Studio when working with the core code.

To build the R package from source, cd into r-package and run build_package.R. Required development dependencies are listed there. This mimics the tests run when submitting a pull request. Additional online package documentation is built using continuous integration with pkgdown. Usage examples in the form of R Markdown files under grf\vignettes are built and rendered and the R method reference (along with the package articles) is displayed according to the layout defined in pkgdown.yml. To build the site locally run pkgdown::build_site() from the R package directory.

An alternative development workflow is to use the accompanying grf.Rproj and build and test the package with RStudio’s build menu, which can be convenient for quickly iterating C++/R code changes. Compiling the package locally with PKG_CPPFLAGS="-UNDEBUG" (or set in ~/.R/Makevars) may give helpful debug assertions, as the Eigen library will then perform bounds checks on matrix algebra.

CRAN releases have a 3-digit version number, while the development version has 4 digits. This convention allows one to easily distinguish if a package was installed from CRAN or from GitHub (R does not allow version numbers with a “devel” tacked on).

Symlinks in the src directory point to the core C++ and R bindings. On Windows one has to clone this repository with symlinks enabled: git clone -c core.symlinks=true https://github.com/grf-labs/grf.git (this command needs to be run as an administrator: right click Command Prompt -> Run as administrator). Caveat: the above RStudio workflow is not tested on Windows. 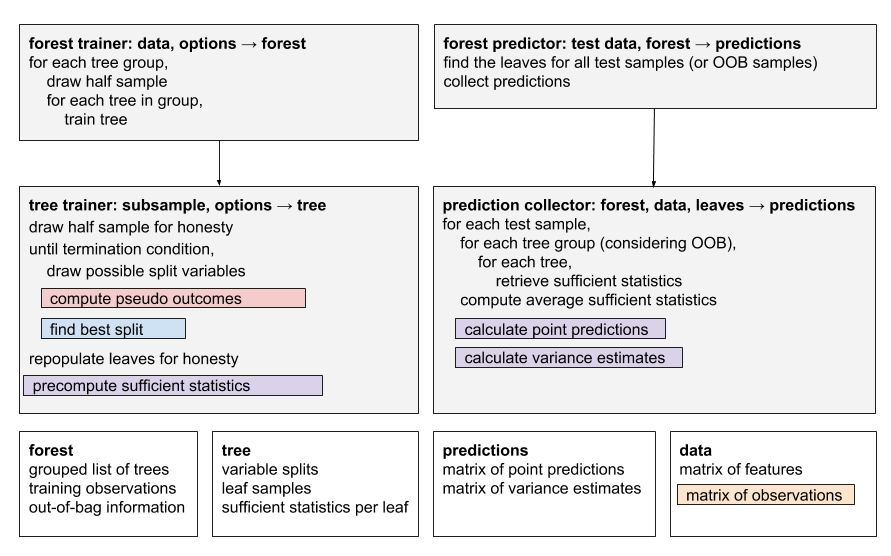 The forest implementation is composed of two top-level components, ForestTrainer and ForestPredictor.

ForestTrainer drives the tree-growing process, and has two pluggable components.

The trained forest produces a Forest object. This can then be passed to the ForestPredictor to predict on test samples. The predictor has a pluggable ‘prediction strategy’, which computes a prediction given a test sample. Prediction strategies can be one of two types:

A particular type of forest is created by pulling together a set of pluggable components. As an example, a quantile forest is composed of a QuantileRelabelingStrategy, ProbabilitySplittingRule, and QuantilePredictionStrategy. The factory classes ForestTrainers and ForestPredictors define the common types of forests like regression, quantile, and causal forests.

When designing a forest for a new statistical task, we suggest following the format suggested in the paper: provide a custom RelabelingStrategy and PredictionStrategy, but use the standard RegressionSplittingRule. If modifications to the splitting rule must be made, they should be done carefully, as it is an extremely performance-sensitive piece of code.

To get started with setting up new classes and Rcpp bindings, we suggest having a look at one of the simpler forests, like regression_forest, and use this as a template.

The following table shows the current collection of forests implemented and the C++ components.

The follow section outlines pseudocode for some of the components listed above.

Each splitting rule follow the same pattern: given a set of samples, and a possible split variable, iterate over all the split points for that variable and compute an error criterion on both sides of the split, then select the split where the decrease in the summed error criterion is smallest. For RegressionSplittingRule the criterion is the mean squared error, and is usually referred to as standard CART splitting. InstrumentalSplittingRule use the same error criterion, but it incorporates more constraints on potential splits, such as requiring a certain number of treated and control observations (more details are in the Algorithm Reference).

Two added features to grf’s splitting rule beyond basic CART is the addition of sample weights and support for missing values with Missingness Incorporated in Attributes (MIA) splitting. The algebra behind the decrease calculation is detailed below.

Output: The best split value and the direction to send missing values

Algorithm (Decrease calculation in weighted CART): find the best split Sj for variable Xj. The impurity criterion is the sum of weighted mean squared errors, which for a specific split Sj is minimized by the weighted sample average Ybar (see for example Elements of Statistical Learning, Ch 9).

Output: The best split value and the direction to send missing values

grf performs survival splits by finding the partition that maximizes the log-rank test for the comparison of the survival distribution in the left and right node. Using the notation from Ishwaran et. al (2008), equation 1 the statistic is:

Note that the absolute value of the response variable (the failure time) is never used, only counts matter, constructed from the relative ordering between them. Therefore, the response variable is always relabeled to range from consecutive integers starting at zero and ending at the number of failures. This can be done quickly with binary search:

The algorithm proceeds in the same manner as outlined above for RegressionSplitting: iterate over all possible splits and calculate the logrank statistic, one with all missing values on the left, and one with all missing on the right. Then select the split that yielded the maximum logrank test, subject to a constraint that there are a sufficient amount of failures on both sides of the split.

Algorithm (ProbabilitySplittingRule): This splitting rule uses the Gini impurity measure from CART for categorical data. Sample weights are incorporated by counting the sample weight of an observation when forming class counts. The missing values adjustment is the same as for the other splitting rules.